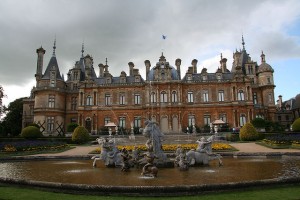 Anyone who has visited Waddesdon Manor will have been struck by the Morning Room, in which rows of impressively large books are carefully encased in cabinets. For most visitors, these books remain nothing more than particularly expensive decorations since there is little opportunity to handle or open them.

Thankfully, recent projects have been lifting the covers (as it were) on the contents, revealing satirical and rabble-rousing content that contrasts with the seemingly royalist surroundings. Waddesdon Manor was built in the late nineteenth century in a neo-Renaissance style by Gabriel-Hippolyte Destailleurs for the baron Ferdinand de Rothschild. Ferdinand was a historian fascinated by early modern France and Waddesdon Manor features many royal relics including Marie-Antoinette’s desk, and the large state portrait of Louis XVI by Callet. With rooms filled with Sèvres porcelain, and tapestries from the royal Gobelins and Beauvais workshops, Waddesdon exudes opulence rather than radical politics.

This fascinating disparity was exploited by my colleague Paul Davidson and me, when we co-curated an exhibition at Waddesdon in 2011, called ‘A Subversive Art: Prints of the French Revolution’, to demonstrate the radical content of four such volumes: The Tableaux de la Révolution. Our method to entice visitors to the exhibition was to create a treasure-hunt-like trail throughout the manor, leaving incendiary prints of Louis XVI, Madame de Polignac, Marie-Antoinette, and the Duc d’Orléans next to their rather more grandiose depictions. While the exhibition is now over, you can still consult the contents of the volumes online, and through these series of videos featuring Katherine Astbury as well as Paul and me.

These are by no means the only books at Waddesdon Manor whose content may surprise you. The Saint-Aubin Livre de Caricatures tant Bonnes que mauvaises is an incendiary book from the age of enlightenment. A mixture of politically astute commentary and scatological sketches, it is the subject of an important study edited by Colin Jones, Juliet Carey and Emily Richardson.

However, if the binding itself intrigues you as much as the content, then Waddesdon’s Catalogue of Printed Books and Bookbindings, edited by the Voltaire Foundation’s late founder Giles Barber, will certainly be of interest. This catalogue of French 18th century books and bindings at Waddesdon will be published later this year.

One of the bitterest and most famous of the many quarrels that Voltaire was involved in during his long life was the one that pitted him against Maupertuis from 1752 onwards. The quarrel started while both men were living at Frederick the Great’s court, Maupertuis as the president of the Académie de Berlin and Voltaire as Frederick’s personal guest.

The details of the dispute itself are too intricate to be exposed here but can be found in Voltaire’s Histoire du docteur Akakia, a collection of texts which were both a response to and a continuation of this quarrel. The dispute eventually saw the king of Prussia himself intervene on behalf of the president of his Académie, and damaged almost irreparably the friendship between Voltaire and his crowned admirer. The quarrel also seriously damaged Maupertuis’s reputation as a scientist, as Voltaire conducted a relentless campaign of denigration aimed at both his enemy’s character and writings, which continued well after his foe’s demise in 1759.

The wit and sarcasm deployed by Voltaire against Maupertuis overshadowed the latter’s undeniable contribution to the scientific advances of his century and the visionary aspect of some of his writings. Among Voltaire’s recurring targets for mockery is the idea proposed by the scientist that drilling a hole to the centre of the Earth would be of enormous interest to science.[1] For all of Voltaire’s scathing gibes at what he repeatedly described as the fanciful notions of a madman, modern science has now vindicated the much-maligned Maupertuis, not his formidable detractor, as can be seen in an article published in The New Scientist. Similarly, the hypothesis that some celestial bodies might contain diamonds which the scientist formulated in his Œuvres and which Voltaire dutifully ridiculed does not sound that far-fetched to modern-day astronomers.

No doubt Maupertuis would have welcomed these new developments, more than two and a half centuries after his scientific intuitions were so mercilessly and relentlessly mocked by Voltaire.