With so many good reasons for visiting Amsterdam, the idea of going there to read 70 or so bibliographies in two days might not seem the most compelling. None the less, I and five other people interested in book history did exactly that in October, as guests of the Breslauer Foundation of New York, which awards a prize  for the best bibliography published in the previous four years in any language. Publishers are invited to submit entries for consideration, and the winner will receive the prize of $10,000 at a gala dinner in Paris next year. The whole process (reading, discussing and deciding the winner) was enlightening, educational and – believe it or not- very good fun! We read bibliographies on subjects as varied as  a Compendium of German-Language Books of Travel in Spain 1750-1900, Social Liberation from the French Revolution to the Middle of the Twentieth Century, Nineteenth-Century American Designers & Engravers of Type, as well as more conventional author bibliographies. It was one of these that we eventually chose as the winner:  Ian Fleming. The Bibliography, by Jon Gilbert, a truly impressive and exemplary piece of research and scholarship which will not be superseded. 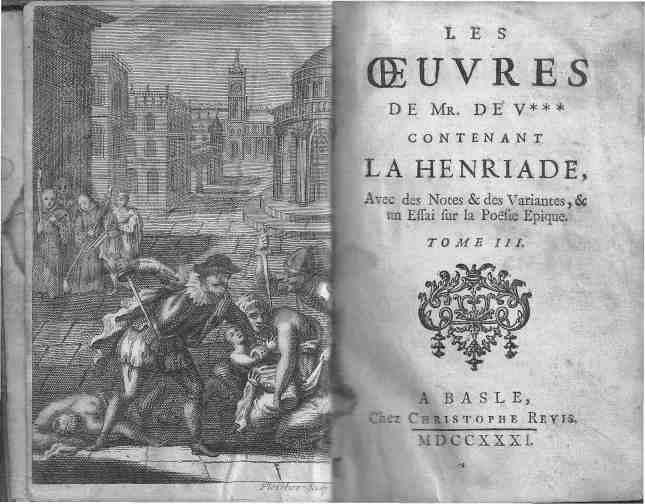 One of the reasons why bibliographies are essential to the scholar is that they can reveal previously-unknown editions of works. But however many editions of Voltaire come to light, there always seem to be more left to discover. So, completing the bibliography of Voltaire, as Theodore Besterman reminded us many years ago, is an impossible dream: nobody will ever be able to guarantee that every possible edition, in every possible variant, has been recorded. To illustrate the point, here is a scan of a newly-discovered volume of the Oeuvres de Mr. de V***, containing La Henriade, which is now in the VF’s own collection. There is no clue as to what may have been in the two preceding volumes, but they almost certainly contained editions of his plays, such as Oedipe, Herode  et Mariamne and L’Indiscret, among others. The frontispiece is a copy in reverse of the one in the 1728 ‘Seconde édition’ of La Henriade which was undoubtedly printed in London. The fact that the printer of this volume is said (falsely) to be Christophe Revis in Basle suggests that the printer wanted to capitalise on the success of the Histoire de Charles XII of 1731, which bears the same false imprint, but was printed in Rouen by Jore; indeed, it is quite possible that Jore printed this edition as well. Somewhere, the two previous volumes of the edition may be lurking, unnoticed, in a private collection or even a library which has not been fully catalogued. So, keep looking….