THE FRENCHMAN: Is it true that your Sultan can marry hundreds of wives who are kept in a forbidden place known as a ‘harem’, to which, apart from the Sultan himself, only eunuchs have access, men whom our Voltaire describes as chaponnés? Is it true that their job is to keep the harem tidy, to sort out squabbles between inmates, and to make sure that whichever wife the Sultan has chosen for the night is epilated, bathed and perfumed ready for her master’s bed?

Is it also true that only one wife is permitted to bear the children that will constitute the royal bloodline? And that any offspring born to the others will be considered illegitimate? And that of those bastard children, the pretty girls will be offered to another ruler for his harem (thereby making sure that the Sultan does not, inadvertently, bed one of his own daughters), while the plain or ugly girls and all the boys are sold at market? 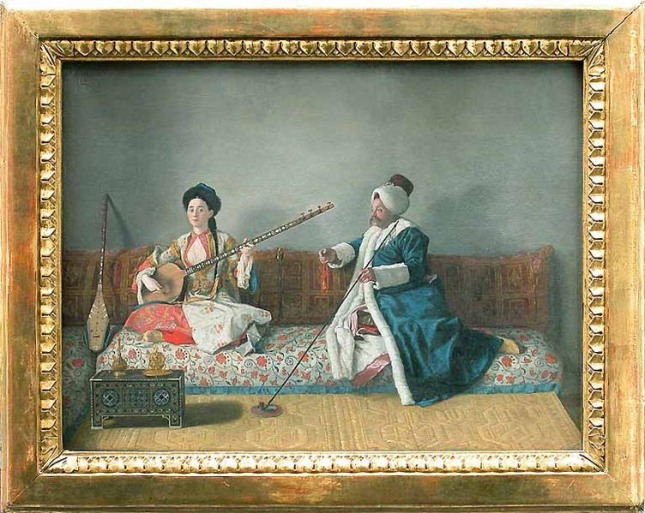 “Monsieur Levett and Mademoiselle Glavani in Turkish costume”, oil on canvas by the Swiss-French artist Jean-Etienne Liotard. Painted at Constantinople circa 1740, the work shows English merchant Francis Levett, of the Levant Company, with his friend Miss Glavani, in the dress favoured by Liotard in his works. Courtesy of the Louvre Museum, Paris.

THE TURK: All too true. Our pirate ships criss-cross the seas on the lookout for vessels likely to be carrying pretty girls, and the pirates seize them. Once on board they separate the men and the boys from the women, and the pretty girls from the plain or ugly ones. They then sell the males and the less attractive females at market wherever they happen next to make landfall. The pretty girls are then offered to the Sultan for his harem.

As for the elaborate rituals involved in preparing the wife whom the Sultan appoints to share his bed on a particular night, I can do no better than refer you to Wikipedia, a work of reference which can be consulted much faster than it takes to lift down from the shelf the weighty tomes of the work edited by your Monsieur Diderot.

As for the locus standi of a particular member of a harem, a case involving a lady from what you call the Holy Land is about to be heard in London. The High Court will decide if a vow the Sultan made her – to wit, that she would be well provided for once he no longer required her services – is enforceable in law. If it turns out to be so, his Sultanic Highness will have to hand over twelve million gold dinars to the lady in question. It is a landmark case; here is the reference for your convenience.

A popular book on space exploration and the long-term future of a spacefaring humankind is not a place where one would immediately think of finding quotations by Voltaire. But Pale Blue Dot by the famous US astronomer Carl Sagan is inspired by Voltaire’s writings in several places.

Sagan’s chapter 3, ‘The Great Demotions’, is prefixed by an epigraph from Micromégas, a philosophical tale by Voltaire. In this quotation, a human philosopher tells two celestial visitors, one from Sirius and the other from Saturn, that they, their worlds and their stars were created solely for the use of man: ‘At this assertion our two travelers let themselves fall against each other, seized with a fit of inextinguishable laughter.’ A fitting introduction to a chapter relating how scientific discoveries have progressively marginalised humanity’s conception of its place in the universe – the Copernican revolution in thought, with which Voltaire was clearly in sympathy.

The message is reinforced in another quotation from Micromégas, in which Voltaire describes how the cosmic travellers eventually discovered ‘a small light, which was the Earth’, but even then were unable to find ‘the smallest reason to suspect that we and our fellow-citizens of this globe have the honor to exist’.

The minuteness of planet Earth and of its human inhabitants in the enlightened cosmic perspective is the main theme of Sagan’s book, which takes as its starting-point a series of 60 photographs taken by the Voyager 1 space probe in 1990, after it had passed beyond the orbits of Neptune and Pluto. From Voyager’s vantage point 6 billion kilometres distant, Earth appears as a single bluish pixel of light, the ‘pale blue dot’ of the book’s title, just as Voltaire’s travellers would have seen it. Yet, after decades of outbound flight since its launch in 1977, Voyager 1 has still only travelled a small fraction of the distance that separates us from Sirius, one of the closest stars to our Sun, and the home of one of Voltaire’s fictional aliens (Voyager is currently about one part in 4500 of that distance away from us).

A quotation from Voltaire’s Memnon puts humanity in its place in another way: ‘our little terraqueous globe is the madhouse of those hundred thousand millions of worlds’ (in a footnote, Sagan approves the accuracy of that order of magnitude figure given current knowledge). Yet there is not only mockery of our pretensions and self-importance, but hope for the future, too, for Sagan was an optimist who saw an opportunity for our descendants to become cosmic travellers, just as Voltaire describes his aliens doing in Micromégas: ‘Sometimes by the help of a sunbeam, and sometimes by the convenience of a comet, [they] glided from sphere to sphere, as a bird hops from bough to bough. In a very little time [they] posted through the Milky Way’ (according to the translation in Pale Blue Dot).

In order to achieve such a future without destroying itself in the process, humankind must order its affairs in a more enlightened manner: such is Sagan’s message. Voltaire would surely have agreed: his historical writings which have passed across my desk on their way to typesetting are full of scathingly critical comments about the crimes committed by popes, kings and emperors, and they express his horror at the tortures and injustices inflicted by members of one religious sect on another. 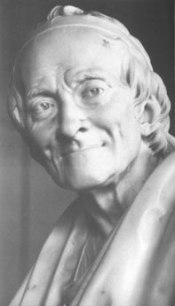 Bust of Voltaire by Houdon

Yet in the end, it seems, Voltaire could not shake off his doubts. In an article entitled ‘Voltaire’s astronauts’, William Barber points out that when Voltaire wrote of the material inhabitants of other planets visiting Earth, during the 1730s, both his scientific enthusiasms and his personal contentment were at their height: ‘Man is in his rightful place in a Newtonian universe where order and reason prevail.’

But the evils and misfortunes of life subject such optimism to severe strain, and Voltaire later found it necessary to construct tales of metaphysical visitors, such as the angel Jesrad in Zadig (1747), who it was hoped would bring divine consolation and reassurance that all really was well. This they were unable to achieve, at least in Voltaire’s stories, because their religious prestige was tarnished, Barber writes, ‘derived from a world-view already rejected’.

Again, Katherine Astbury notes at the end of her edition of Memnon for OCV (a conte which was closely related to Zadig): ‘Memnon’s refusal to accept the view of his guardian angel and submit to providence is a reflection of Voltaire’s dissatisfaction with optimism in general and Pope’s view of the universe in An Essay on man in particular.’

We, too, face conflicts between optimistic visions of a civilisation steadily gaining wealth and knowledge and expanding out into the cosmos, versus pessimistic ones of our imminent destruction through climate change, nanotechnology, the information revolution, peak oil or other causes. Hopefully, with the longer perspective allowed us by 250 years of scientific progress to which Voltaire was not privy, we have more reason to maintain our optimism than he did.

Pale Blue Dot (Headline, 1995) is an accessible popular book by a widely respected scientist giving his views on the planetary explorations in which he took part and on the future prospects for our species. Carl Sagan quotes from or references Voltaire on pages 25, 34, 35, 59, 394, 397.

Micromégas is available in Romans et Contes, ed. Frédéric Deloffre and Jacques van den Heuvel (Paris, Gallimard [Pléiade], 1979). Its publication in OCV is provisionally scheduled for vol.20C in 2018. It is available online in French (TOUT VOLTAIRE) and in English translation (Project Gutenberg).

Memnon and Zadig are published in OCV, vol.30B.