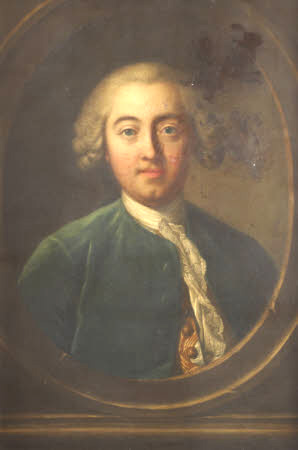 Helvétius is remembered today, three hundred years after his birth, mainly for two controversial treatises: De l’esprit (1758) and De l’homme (1773). The furore surrounding the publication of De l’esprit was particularly intense, and the ensuing affaire soon reached the status of being one of the great literary scandals of the age. De l’homme added more fuel to the flames.

Voltaire’s connection with Helvétius predates this notorious affaire and can be traced back to 1738. The fourth of the Discours en vers sur l’homme is dedicated to ‘M. H***’, [1] and it is clear from their first exchange of letters between July 1738 and August 1740 that Voltaire was immediately impressed with the young Helvétius. On Helvétius’s appointment as fermier-général in 1738 he composed a poem in his honour, the Epître à Monsieur Helvétius. [2] He sent his ‘cher élève des muses, d’Archimede et de Plutus’ a copy of the Eléments de la philosophie de Newton, and invited him to Cirey (D1560, D1581): ‘Nous avons ici un fermier général qui me paraît avoir la passion des belles-lettres’ (D1570).

Voltaire’s disapproval of De l’esprit can be seen in ‘Du mot quisquis de Ramus, ou de La Ramée’ in the Questions sur l’Encyclopédie, [4] and he resented the fact that Helvétius had never discussed the treatise with him. However, the warmth of his affection, never fully reciprocated, would survive their differences. In 1760 and 1761 he pressed the case for Helvétius’s election to the Academy (D9047, D9600), telling Helvétius that he was ‘mon confrère dans le petit nombre des élus qui marchent sur le serpent et sur le basilic’ (D9777).

Their friendship had already started to cool in 1741, and in the 1760s the ideological distance widened as Helvétius gravitated towards d’Holbach and the materialists. By 1767 Voltaire had ceased to see Helvétius as his disciple, but the soft spot he had for the man he once called ‘l’espérance et le modèle des philosophes et des poètes’ (D2096) would endure: ‘Je n’aimais point du tout son livre, mais j’aimais sa personne’ (D17572). The masonic lodge to which Voltaire was admitted on 7 April 1778 was Helvétius’s lodge, and it was Helvétius’s masonic apron that he wore for the ceremony of induction before the bust of his ‘ami charmant’ (D2147).

While writing this it was with great sorrow that I learned of the death of Alan Dainard on 19 December 2014. An eminent member of the French Department at the University of Toronto, Alan was one of the founder members of the editorial team lead by David Smith of the Correspondance générale d’Helvétius, the first volume of which appeared in 1981 under the joint imprint of the University of Toronto Press and the Voltaire Foundation. He was also the General Editor of the Correspondance de Madame de Graffigny to which he dedicated most of his scholarly life. The fifteenth and last volume of this edition is due for publication by the Voltaire Foundation in 2015. Alan will leave a gap in our ranks not easily filled.

In the BBC News Magazine on 8 January Tom Holland (the author of Islam, The Untold Story) wrote: ‘When Philippe Val, the editor of Charlie Hebdo, published a book in 2008 defending the right of cartoonists to mock religious taboos, the title was telling. He called it Reviens, Voltaire, Ils Sont Devenus Fous (Come Back, Voltaire, They’ve Gone Mad)’. In recent years many of us have been tempted, like M. Val, to call out: ‘Come back, Voltaire, we badly need you!’

‘Once fanaticism has infected the brain, the malady is all but incurable’, writes Voltaire in the Pocket Philosophical Dictionary. Pressing home the idea that fanaticism is a kind of illness, he says: ‘fanatics are people whose madness is fuelled by murder; those who assassinated Henri IV and so many others were sick people, all suffering from the same mad rage’. Speaking of a fanatical sect he’d watched at close quarters becoming ‘more and more agitated’, he notes that ‘their eyes blazed, their limbs shook, and their faces grew ugly with rage’. He adds, as if foreseeing the murders in the Charlie Hebdo offices, ‘they would have killed anyone who dared gainsay them’.

In a particularly arresting phrase he claims that there is no defence against this ‘bubonic plague of the spirit’. Faith is least effective of all: ‘far from being health-giving nourishment for the soul, in infected brains religion morphs into a poison’. Indeed, it’s hard to see the minds of the authors of the massacre in the Rue Serpollet as other than poisoned.

Being a man of his time Voltaire believed, rather optimistically, that the only antidote to this poison was philosophy. The cure for such an illness, he says, ‘is the philosophical cast of mind, which eventually makes us gentler in our ways’. I don’t know whether the assassins of the Charlie Hebdo cartoonists left their French school before the final year in which philosophie is a compulsory subject. If they did complete the course, it doesn’t appear to have cured them of the ‘poison’ of fanaticism, and it patently failed to make them ‘gentler in their ways’.

Voltaire would have approved of Dan Hodges’s defence of secularism. We must break, Hodges said, ‘the anachronistic link between church and state’, because when it comes to setting boundaries between what can be said – or drawn – and what cannot, we must ensure that they are set not by gods, but by ourselves.

John Fletcher is the translator of Voltaire’s Pocket Philosophical Dictionary.

A photo taken in Paris on Sunday 11 January:

“Philosophy brings peace to the soul; fanaticism and peace are incompatible. If our holy faith has so often been corrupted by this infernal madness, human folly is to blame.”

Writing on the BBC website, historian Tom Holland also thought of Voltaire: “Viewpoint: The roots of the battle for free speech”.

From his childhood in the rural region of Cévennes in south-central France, La Beaumelle became one of the great eighteenth-century polymaths, and his career took him as far afield as Geneva, Copenhagen, Berlin, Paris and Amsterdam. During his lifetime he distinguished himself as a translator of Horace and Tacitus; he was also an author, a journalist, a historian, and the editor of Mme de Maintenon’s Mémoires. He was a champion of tolerance and one of Calas’ foremost defenders, as well as a polemicist dreaded by Voltaire for his sharp critical eye and clever pen. He was, strikingly, the only Huguenot man of letters at the time.

The 10th volume of a projected eighteen-volume edition will publish soon, and follows the turbulent period of February to December 1756. At the beginning of 1756 La Beaumelle was in Amsterdam, a city that allowed him the freedom – unlike Paris – to publish the Mémoires de Maintenon. In early March he returned to Paris, having been granted permission to distribute subscribers’ copies of the first edition of the Mémoires, and, crucially, assured beforehand of his personal security. 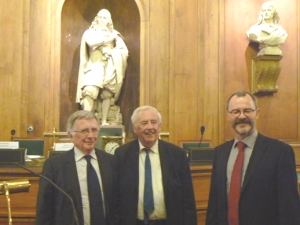 After arranging the distribution of the second edition and obtaining oral permission to write a third, La Beaumelle was dealt a severe blow: he was arrested and placed in the Bastille. The charge? Writing a passage that offended the Viennese court, a passage suspected to have been brought to the attention of the authorities by Voltaire. His imprisonment was not one of shackles and locked cells, however, as La Beaumelle was free to take daily strolls, and to receive books and letters as well as visitors. Though officially pardoned in October 1756, La Beaumelle was still in prison at end of the year, waiting for the requisite release documentation.

When the Correspondance générale de La Beaumelle was awarded the prestigious the 2013 Prix de la Fondation Edouard Bonnefous de l’Institut de France, on the recommendation of the Académie des sciences morales et politiques, it was a mark of recognition of the editors’ momentous work in bringing to light the rich correspondence of this Enlightenment figure. 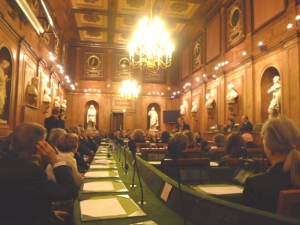 The Voltaire Foundation is enormously proud to publish this towering work of scholarship, and we congratulate our editors, Hubert Bost, Claude Lauriol and Hubert Angliviel de La Beaumelle, for their sustained and meticulous work.