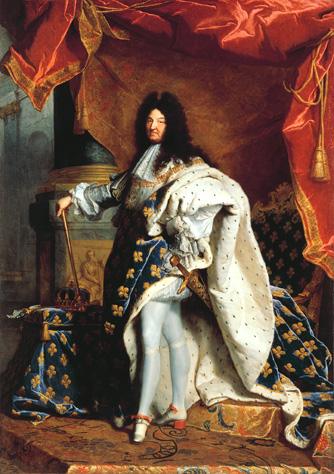 In 2015, the tercentenary of the death of Louis XIV, the VF is delighted to be launching our publication of Voltaire’s seminal Siècle de Louis XIV, critical edition by Diego Venturino of the Université de Lorraine. We are very proud to be doing so with the generous support of the Centre de recherche du Château de Versailles.

As part of our partnership, we are doing something completely new for OCV and the VF in producing an illustrated edition of the Siècle. Each chapter will benefit from at least one image from the rich collections of the château de Versailles, the full extent of which are rarely seen by the public.

Valérie Bajou, specialist curator at Versailles came to Oxford in the autumn, bringing with her an entire filing cabinet (almost!) full of the results of her research. Alongside the VF team, and with valuable input from our scientific editor, Diego Venturino, we compiled a shortlist for each of the thirty-nine chapters of Voltaire’s text. We had to work within certain technical constraints, and so concentrated on engravings (for better quality reproduction in black and white), prioritising portrait format over landscape to fit with the dimensions of the book, and preferring contemporary representations to more recent renditions. 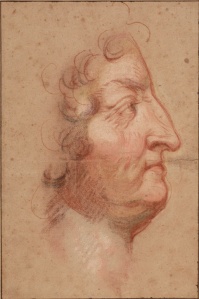 We tried not to simply show a succession of portraits of famous people, including in addition allegorical prints, depictions of battles and even diagrams. Some chapters gave us more trouble than others: we found plenty to choose from in those chapters dealing with the Sun King’s many military successes; but, unsurprisingly, rather less choice for chapters such as number 21, ‘Suite des disgrâces de la France…’ We found a beautiful and very human drawing of the king in extreme old age which contrasts wonderfully with the famous Rigaud portrait of him resplendent in full-wigged, red-heeled glory.

Chapter 7, ‘Louis XIV gouverne par lui-même’, finds an echo in an engraving with the legend: ‘Le Roi mon maître gouverne lui-même, il voit tout, il entend tout, il ordonne de tout’. We were keen to include some images of Versailles itself, whose construction was a major part of the Sun King’s life’s work and legacy, and we were thrilled to discover a rather daring image of his mistress, Mme de Montespan, legs and bosom bare… 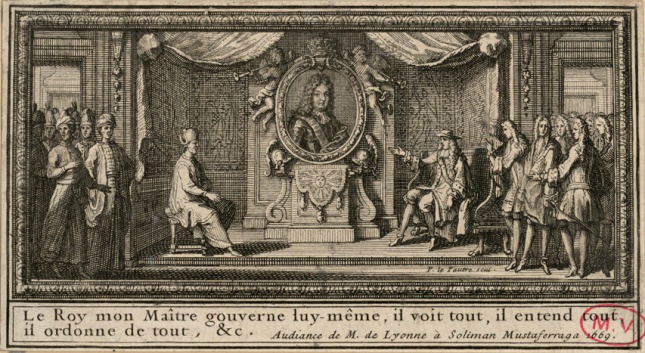 It has been such a pleasure to discover the treasures of the Versailles image collection, and a privilege to work with all the knowledgeable people there who are helping us to make this edition one of the most beautiful so far in the OCV series.

Can art be taught? Certainly. The larger question is, can it be learnt? And if so, how? 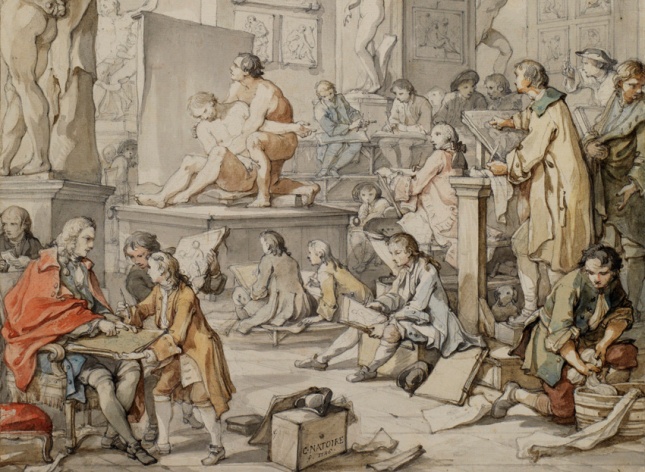 From at least 1298, when Philip IV sponsored a court artist’s study-tour of Italy, French monarchs and ministers believed art was best learned by reproducing the frescoes, paintings, statuary and Roman ruins found beyond the Alps. While the origins of Philip’s respect for Italy are unclear, not so that of the Valois kings who profited aesthetically from sixty-five years of warfare on the peninsula (1494-1559) and issued invitations to Italian masters upon their return. Perhaps inspired by their work, French artists and architects made their separate ways to Florence and Rome during the sixteenth and seventeenth centuries, some with government support, others on their own. Whether they selected a mentor or allowed curiosity to lead them, their experiences were necessarily uneven, but the glories of French Renaissance and Classical art and architecture leave no doubt that they did indeed ‘learn’. 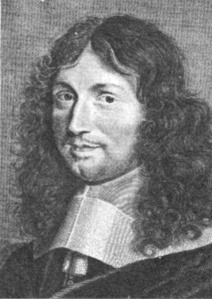 Individual artists continued to study Italian masterworks throughout the Ancien Régime, but in so far as official France was concerned, structured curricula replaced independent study – even in Rome itself. In Charles-Joseph Natoire and the Académie de France in Rome: a re-evaluation I discuss how Jean-Baptiste Colbert instituted advanced training in the papal city for a select group of young men who had been awarded Grands Prix by the Académies royales de peinture et de sculpture (1648-1793) and Architecture (1671-1793).

For some twenty years, Grands Prix painters and sculptors were further prepared for Rome through the government-sponsored programme at the Ecole royale des élèves protégés in Paris (1751-1774). Each step in the educational programme decreased students’ control over their art, for financial support brought obligation. Even if, from 1676 onward, the Académie de peinture reviewed portfolios to determine who had to compete for that year’s Grand Prix, students were still at liberty to conceptualise and develop the topics assigned. As the king’s protégés, however, they copied artwork held in the Louvre and, in general, chafed under the rules Colbert had developed for the pensionnaires of the Académie de France in Rome (1666-1793), whose goal was to form artists ‘capable of serving the king well’. Colbert interpreted this literally.

In its early years, the Académie de France functioned more like a boot camp than an art school, as students reproduced ‘everything beautiful’ in the city and Colbert dispatched cargo ships from Marseilles to collect work intended to enhance the halls and gardens of the king’s multiple properties. That need eventually diminished: in 1742, Philibert Orry, who then directed the Bâtiments du roi, served notice that no more copies of antique statuary were required. The pensionnaires were still not free to explore their own interests, however. In 1752, Bâtiments director Marigny, told Natoire that students’ ‘real business’ was to copy the work of the great masters and do this ‘without ceasing’.

Did students learn from these experiences? Certainly, all were competent and many became successful, as Bourbon France defined that success: admitted to the royal academies, exhibiting at the Salons and working for French and European courts. Looking back, though, only the autonomous Jacques-Louis David has proved as influential as certain seventeenth-century painters such as Nicolas Poussin and Charles Le Brun, whose independent study in Rome transformed the Ecole française.

Voltaire’s historical writings form a significant part of his output, including works on Louis XIV, Louis XV, Charles XII, Peter the Great, the Holy Roman Empire, and even a pioneering universal history. These histories were highly regarded in his lifetime, and Voltaire was a powerful influence on the other great historians of the age, Hume, Gibbon and Robertson. 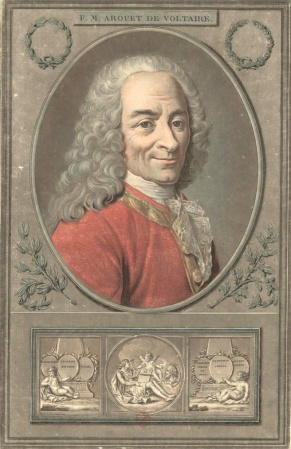 Despite this, writers now are uncomfortable in trying to explain the importance of Voltaire as a historian. Karen O’Brien, for example, remarks that ‘Voltaire’s histories have not recovered today from the low reputation to which they sank after the French Revolution’. [1] We typically criticise Voltaire’s histories for being polemical and tendentious: his determination to view everything from a resolutely modern point of view can make him seem naïve, and some find it puzzling that his histories were once held in such esteem.

The aim of the Voltaire: historian of modernity project is to come to a better understanding of Voltaire’s overall philosophical project, by focusing on a neglected aspect of his work: his determination to write ‘modern’ history. Much of his historical writing, especially in the earlier years, is devoted to the modern world. Voltaire first explores the defining characteristics of the modern world (the benefits of trade, the scientific revolution, religious toleration) in a book about England (Lettres sur les Anglais, or Lettres philosophiques), before studying the flourishing culture of France during the previous century (Le Siècle de Louis XIV). He then extends this exploration, forwards into modern France (Précis du siècle de Louis XV), and outwards into the recent history of the whole world (Essai sur les mœurs).

The study of recent history was, Voltaire declared bluntly, ‘a matter of necessity’. [2] The study of modern times was more precise than the study of ancient history, because sources were more numerous and more reliable. Most importantly – and here Voltaire seems influenced by the English writer Bolingbroke – modern history is best placed to offer us instructive examples. Traditionally, it had always been ancient history that was thought to be significant as a source of morally improving examples of conduct. Voltaire turns that idea on its head. As an Enlightenment philosopher, he wants to teach the lessons of free thought and religious tolerance, and he turns to modern history for telling examples to prove his point.

Voltaire’s histories are not in a separate category on the margins of his œuvre: they are at its very core. We need to (re)read the modern histories alongside Voltaire’s other polemical works, and to understand them as part of one and the same project. The spirit of criticism that characterises the Enlightenment begins when we scrutinise our own age, and we cannot fully understand Voltaire the philosopher without appreciating his commitment to the study of modern history. [3]

[3] This blog post is based on an article that first appeared in the Leverhulme Trust Newsletter in 2014.