The idea of publishing the Œuvres complètes de Voltaire is 50 this month. This has made us reflect on the many people who have been – and still are – working to realise this ambitious project in 2019. The current Vf in-house team have all been around at least ten years; however, only one of us was part of the first twenty-five years, so he was asked to write a blog!

Theodore Deodatus Nathaniel Besterman, in the course of a life of extraordinary intellectual activity, became a passionate voltairien, at one time living in Voltaire’s house, Les Délices, and sleeping in the philosopher’s own bedroom. Whether Besterman’s earlier experience as research officer for the London Society for Psychical Research enabled any special insights through this location is not recorded, but he used his time in Geneva to produce an edition of Voltaire’s correspondence (107 volumes) and Notebooks, as well as starting the series Studies on Voltaire and the eighteenth century (now Oxford University Studies in the Enlightenment). After moving back to England he proposed, at the second congress of the International Society for Eighteenth-Century Studies at St Andrews in 1967 (the Society itself being in part Besterman’s creation), to produce a critical edition of the complete works of Voltaire, an offer enthusiastically received by Jean Ehrard, René Pomeau, Owen Taylor, Samuel Taylor and Jeroom Vercruysse. The Œuvres complètes de Voltaire were born and an international committee formed to direct the edition, including, as well as the above, William Barber (later general editor), Roland Mortier and Robert Niklaus. The Voltaire Foundation was based at Besterman’s house at Thorpe Mandeville in Oxfordshire.

Besterman immediately started a revised edition of the correspondence, to be called the ‘Definitive edition’ (1968-1977), and of the Notebooks, published in 1968. The following year saw the appearance of La Philosophie de l’histoire, edited by J. H. Brumfitt, and in this year too Besterman published his biography of Voltaire, which was to see two revised editions over the following six years, and translations into Italian and German in 1971. 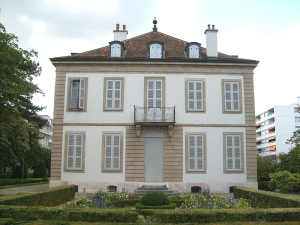 The Maison Les Délices in its garden in Geneva (Wikimedia commons).

1970 saw Owen Taylor’s edition of La Henriade, a revision of his edition published in 1965 in vols 38-40 of Studies on Voltaire and the eighteenth century, this series also being a creation of Besterman while in Geneva. (Owen’s bequest still supports a travel grant established to support young researchers). In the same year Jeroom Vercruysse’s edition of La Pucelle appeared.

Research and publication progressed steadily, helped from 1974 by Samuel Taylor’s detailed recension of Voltaire’s emendations to his own text in the copy of the ‘encadrée’ edition in Voltaire’s own library in Leningrad (SVEC 124). In this year William Barber became general editor. David Williams completed his three-volume edition of the Commentaires sur Corneille and he continues to contribute to the series, most recently in the Nouveaux Mélanges (2017).

1976 brought great changes as Theodore Besterman died and the Voltaire Foundation was bequeathed to the University of Oxford. A small office was set up in Oxford in 1977, consisting of just two people, to be joined the following year by the present writer, whose initial responsibilities were the continuing publication of Ralph Leigh’s edition of Rousseau’s correspondence, which Besterman had also taken on, and the Studies on Voltaire and the eighteenth century series, now with Haydn Mason as general editor.

Publication of the complete works continued, with notably, in 1980, Voltaire’s most famous work, Candide, edited by René Pomeau, who had previously published his study La Religion de Voltaire and who went on to lead the team that wrote Voltaire en son temps, published by the Voltaire Foundation, a rich source for Voltaire studies. The number of international collaborators increased and Christiane Mervaud and Haydn Mason joined the committee. In 1984 La Défense de mon oncle and A Warburton, edited by José-Michel Moureaux, appeared and his work on Lettres sur les miracles will be published in 2018 in collaboration with Olivier Ferret.

In 1986 Le Droit du seigneur, edited by W. D. Howarth, Haydn Mason’s predecessor at Bristol University, was published and his edition of Le Dépositaire was revised by Russell Goulbourne and published in 2013. In 1987 John Renwick’s edition of André Destouches à Siam appeared in volume 62, and he continues to contribute widely to the series. Roland Mortier, whose Le Philosophe ignorant and L’Examen important de milord Bolingbroke also appeared in volume 62, is thanked for his work on the Fragment d’une lettre du lord Bolingbroke by Jean Dagen, whose edition appears in a volume to be published in 2017; and in 1988 Sylvain Menant joined the committee – his most recent contribution was published in 2014 in Contes de Guillaume Vadé.

This period saw the idea of a rare individual, who might, some thought, have almost believed himself to be a reincarnation of Voltaire, grow into reality through the collaboration of a large number of scholars in several countries and continents who laid a solid foundation for the next twenty-five years plus. To be continued…