Try googling ‘light and enlightenment’ and see what you find. Buddhism, new age religion, mindfulness, and spirituality top the list. Scroll down and you may come across a few fleeting references to 18th-century theology. But if you are hoping to find discussions of the Enlightenment in the context of lanterns, illumination, and light, you’ll need to search a little harder, or be prepared to be left in the dark.

Was there really no relationship at all between that great movement of 18th-century culture and actual illumination? Between the Enlightenment and light itself? To be sure, scholars have long probed the question in metaphorical terms, showing how a master Christian metaphor was wrested from the hands of those who had once proclaimed Jesus as the exclusive light and way. But to search for some connection between the material practice of lighting and the Enlightenment of the mind appears to have struck many as too basic, or too banal, to spark reflection.

And yet it is clear that light in the age of Enlightenment was more than just a metaphor. We know from the pioneering work of social and urban historians of the night such as Wolfgang Schivelbusch, A. Roger Ekirch, Craig Koslofksy, and Alain Cabantous that the long 18th century was, quite literally, a century of lights in the sense that it witnessed an unprecedented conquest of the dark. Marked by a concerted effort to publicly illuminate cities, this conquest took the form of hundreds of thousands of lanterns that were erected in urban centers from Paris to Potsdam. Whereas in 1660, not a single city in Europe possessed regularly illuminated streets, a century later that situation had changed. Voltaire, for one, took note of the transformation, observing ruefully in his Siècle de Louis XIV (1751) that while ‘five thousand lamps lighted up Paris every night,’ Rome itself was not lighted at all. The symbolism was perfect. Paris had become the true beacon of the world, at once illuminated and enlightened. Rome, not so much.

Although scholars of the Enlightenment have been slow to register these developments, and to ask what impact they may have had on the light of the times, that is beginning to change. Social and urban historians such as Marco Cicchini and Sophie Reculin have been mapping the topography of the 18th-century lighting revolution with ever-greater precision, showing how light moved from a luxury to a necessity in the 18th century, and how new urban spaces around theatres, public promenades, and squares were transformed by illumination. Meanwhile, literary scholars such as Marine Ganofsky have analyzed (in this very blog) the ways in which illumination transformed the night into an erotic adventure-zone, a space free of fear and open to pleasure, where libertines could frolic. And in my own work I have sought to explore the relationship between illumination and Enlightenment in a number of ways. 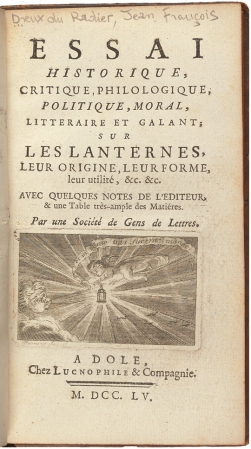 An enlightened history of the lantern by a society of men of letters, by Jean-François Dreux du Radier. Although the work was written as a satire, it effectively contributed to what was a new Enlightenment genre: the cultural and technical history of lighting practices. Beinecke Rare Book & Manuscript Library, Yale University.

For one thing, a surprising number of Enlightenment figures were themselves directly interested in lighting and illumination. Benjamin Franklin, the son of a tallow chandler, took a keen interest in lantern design and helped to organize the public lighting of the city of Philadelphia. Lavoisier penned a treatise on the best means to light a great city like Paris, and experimented constantly with fuels, wicks, and the angles of reflection and refraction in the light emitted from lanterns. Voltaire, too, like Marat and Madame Du Châtelet, experimented with flames. Diderot wrote about the history of candles. Jefferson studied whale oil, among the 18th-century’s most important lighting fuels. Goethe not only studied optics, but also concerned himself with the intricacies of stage lighting.

Just as importantly, a host of lesser lights pursued Enlightenment through illumination. Some, like the inventor and engineer Bourgeois de Chateaublanc, devoted their energy to technical matters, like perfecting the new reflector lamps, the réverbères. Others, such as Jean-Francois Dreux du Radier and his ‘society of men of letters’, wrote satirical histories of lanterns, mocking the pretensions of a new genre, the comparative history of light. Still others, like Pierre Tourtille-Sangrain or Charles de Rabiqueau, pursued the business of illumination as the counterpart to the business of Enlightenment. As the latter declared on his calling card, advertising his services as an entrepreneur de l’illumination, Rabiqueau could ‘enlighten the mind as well as matter.’ 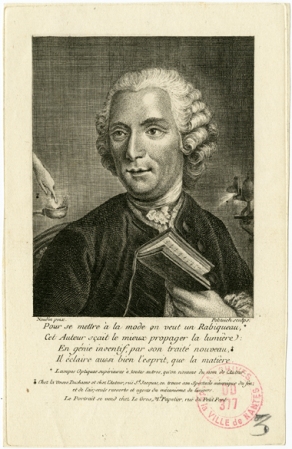 ‘He enlightens and illuminates, both matter and the mind’! The calling card of the inventor, scientist and entrepreneur de l’illumination Charles de Rabiqueau, advertising his services and spectacles at his shop on the rue St. Jacques in Paris. © Archives Nantes.

And that is precisely the point. Enlightenment and illumination went hand in hand. Perhaps most importantly, public lighting created the conditions for a vastly expanded urban sociability that was central to the emergence of the public sphere. Shops stayed open longer, theatre curtain times were pushed back, and restaurants and cafés served long after dark, later than ever before. Salons and visiting hours were also extended into the night, meaning that enlightened discussion was very often conducted after the sun went down. Street lighting led the way, creating the appearance (if not always the reality) of greater safety and rational control over the environment, combatting not just crime but superstition and fear.

Light, in these respects, was a vivid symbol of progress, and contemporaries were highly aware that its implementation set the enlightened apart. As Anne-Louis Leclerc du Brillet observed typically in a draft history of street lighting written sometime in the 1730s, ‘The usage of public lighting in cities does not seem to have been established in any nation previously – even in those that passed for the most civilized (les plus policés).’ Public lighting, in short, was unique to the modern age, and it reflected perfectly the novel sense that contemporaries were living in a novel time, a singular epoch of progress and advancement. To illuminate the night was to begin to understand and control what had long been considered another realm, dispelling darkness and the superstitions it fostered.

Not all, to be sure, welcomed the light. A dialectic of illumination was the counterpart to the dialectic of Enlightenment, giving rise to protests and a European (and North American) wave of lantern smashing over the course of the 18th century. When viewed from this perspective, lanterns could seem a little bit like surveillance cameras; they were not always welcome. And yet by the last third of the 18th century, the evidence is strong that proponents of illumination were overcoming their less enlightened antagonists. It is telling that a good number of the cahiers de doléances written up in France before the convening of the Estates General in 1789 asked for more light, not less. Like Goethe on his deathbed, the Enlightened and illuminated citizens of the age desired mehr Licht.

Darrin M. McMahon is a professor of history at Dartmouth. His article, ‘Illuminating the Enlightenment: Public Lighting Practices and the Siècle des lumières’, appears in the August 2018 edition of ‘Past & Present’.