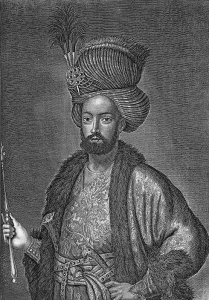 The year 2021 marks the tercentenary of the publication of Montesquieu’s Lettres persanes and the two hundredth anniversary of the death of Napoleon Bonaparte. At first glance, the philosophe who penned a novel about a fictional Persian’s travels to Paris in the first half of the eighteenth century seems to have little in common with the Corsican who marched his army across three continents at its end. But in fact both men were motivated by the same sequence of events to cast their eyes towards Persia. Pierre Victor Michel’s embassy to Shah Soltan Hosayn in 1708 and Mohammad Reza Beg’s delegation to Louis XIV in 1715 inspired Montesquieu’s peripatetic Persian protagonist and Napoleon’s 1808 treaty with Persia’s Fath-Ali Shah. Napoleon was an avid student of Persian history. His admiration for Persian conqueror Nader Shah ran so deep that he brokered his treaty to continue Nader’s invasion of the Asian subcontinent and bill it as a French Revolution in India.

One of the chief architects of this revolution was Jean-François Xavier Rousseau, a forgotten Persian first cousin of another philosophe, Jean-Jacques Rousseau. Unlike the Citizen of Geneva, who eschewed trans-imperial trade and warned against commercial luxury, Jean-François embraced it. His father Jacques had arrived in Persia as part of Louis XIV’s first official delegation to Soltan Hosayn in 1706. He remained there and became jeweller to the Safavid and Afsharid shahs. Jacques’s son was born in Isfahan in 1738. By the age of eighteen, Jean-François secured a position as chancellor of trade in Basra. Following the deaths of the French consuls of Baghdad and Basra in the Great Persian Plague Epidemic of 1773, he assumed their consulships for three decades. Across the reigns of the Zands and the Qajar shah Fath-Ali, Jean-François lobbied Persian rulers, French kings and revolutionary governments to establish alliances while he organized plans for their joint conquest of India.

Jean-François’s project ran contrary to the French Bourbon monarchy’s long-standing partnership with the Ottomans. But from the late seventeenth century, missionaries and entrepreneurs who hoped to enrich themselves and grow French influence further east had peddled the idea of negotiating trade agreements with Turkey’s adversary, Persia. Following Michel’s commercial treaty with Soltan Hosayn in 1708, abbé Martin Gaudereau, Jean Billon de Canserilles, and Greek-French drogman-turned-consul Etienne Padéry attempted to convince Louis XIV, the duc d’Orléans, and Louis XV to secure more privileges by providing weapons and ships that the Safavids and their successors needed to suppress tributary populations and imperial competitors. Persia’s borderland violence intensified as famine and plague forced the Baluch, Kurdish, Ghilji, and Abdali tribes to migrate into the empire and the Omani Ya’rubids fought for control of the Gulf. Having exhausted English and Dutch aid, the Persians increasingly turned to France.

French rulers who sought to repair their global reputation following the disastrous Seven Years War found Persia’s entreaties enticing. Louis XV’s foreign minister, Etienne François, duc de Choiseul, toyed with the idea of colonizing Egypt and weighed opportunities in Basra and Baghdad to weaken Britain’s India trade. Under his direction, Jean-François Rousseau negotiated an agreement with Shah Karim Khan Zand to support French shipping through the Persian Gulf. Plague, borderland conflicts, and succession crises frustrated these plans. But Jean-François continued to lobby for a belligerent anti-British policy in western and south Asia. Following the fall of the Bourbon monarchy, he repackaged his project for a Franco-Persian offensive on India as a logical continuation of the French Revolution.

Napoleon breathed new life into Jean-François’s plans. Imagining a French corridor from Africa across the Indian Ocean and fantasizing being crowned emperor in Asia, he corresponded with Fath-Ali Shah, promising military aid against the Russians in exchange for a joint assault on India. Jean-François submitted a Tableau général de la Perse to Charles de Talleyrand, co-authored with his son Joseph and outlining plans for French marines to join Persians, Afghans, and Sikhs in the Gulf of Sindh, march on Delhi, and seize ‘the places that have knelt under the yoke of British domination’ (see ‘References’ below, no.1). The ‘liberation’ of the subcontinent would allow Napoleon and his Persian ally to surpass Nader Shah as warriors of the century. 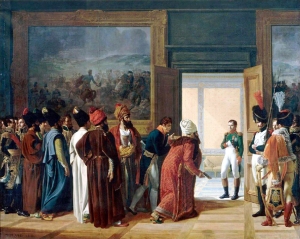 But as soon as Napoleon signed his Treaty of Finkenstein with Fath-Ali’s ambassador Mirza Mohammed Reza Qasvini in 1807, he abandoned Persia and set his sights on Eastern Europe. Jean-François died in Aleppo the same year. While the subcontinent was spared a French offensive, Napoleon’s about-face reignited the Russo-Persian War of 1804-13. Without French aid Fath-Ali could not prevent carnage in the disputed northern frontier as Tsar Alexander drove a wedge into the Caucasus.

So the French Revolution in India never materialized. Then why remember another of Napoleon’s failures? Historians who studied eighteenth-century political ruptures traditionally ignored Asia, focusing on the three revolutions in England, France, and North America. But these were just a few of many political earthquakes that shattered old regimes during the Age of Revolutions. European contemporaries who witnessed the Siamese Revolution of 1688, the janissaries’ revolt against Ottoman Sultan Mustafa II (1703), Mahmud Hotaki’s siege of Isfahan (1722), and Nader Shah’s conquest of India (1738-40) described them as Asian ‘revolutions’, reflected on their causes, and mused over their effects on politics at home.

But as western powers jockeyed for global dominance, European elites consolidated a view, made famous by Montesquieu, that in Asia ‘power is always despotic’ and ‘liberty never grows’ (see ‘References’, below, no.2). The more they associated ‘revolution’ with a modern, democratic experiment, they saw its ideals as exclusively European. Asia was written out of the history of revolutionary progress, and labelled a political aberration. It is time to insert it back in. When we reconsider the Age of Revolutions globally we can better understand how two of the most significant processes of the century – competition among Eurasian empires and the development of democratic revolutions – were more intertwined than scholars have allowed.

Iran and a French empire of trade, 1700-1808: The other Persian letters is part of the Oxford University Studies in the Enlightenment series, published in collaboration with the Voltaire Foundation, University of Oxford.

A version of this text appeared on the Liverpool University Press blog.