The first posthumous edition of Voltaire’s complete works, printed in Kehl in 1784 and financed by Beaumarchais, was recently the subject of a 900-page thesis (Linda Gil, Paris-Sorbonne, 2014). The latest volume of the Œuvres complètes de Voltaire, not lagging far behind, at 604 pages, also started life with this 70-volume edition as its focus, in particular the nearly 4000 pages that make up what the editors call the ‘Dictionnaire philosophique’. Under this title, made up in large part of Voltaire’s 1764 Dictionnaire philosophique portatif (later La Raison par alphabet) and the 1770-1772 Questions sur l’Encyclopédie, the Kehl editors included a number of previously unknown articles and fragments.

A manuscript of one of the texts in this volume (article ‘Ame’, in the hand of Voltaire’s secretary, Wagnière). Bibliothèque de Genève, Musée Voltaire: MS 34/1, f.1.

Our edition of these texts attempts to pin down what they were, when (and whether) Voltaire wrote them, whether certain groups can be discerned amongst them, and to what degree the printed record of the Kehl edition reflects the manuscripts that were actually found after Voltaire’s death – as much as is still possible, that is, after two hundred years have elapsed, and when most of the manuscript sources have long since disappeared.

As the volume moved through the stages of the editing and publishing process, it proved to be a protean thing, changing shape several times: some texts originally included in the original list of contents were found not to belong in the volume after all; others were discovered or moved in from elsewhere along the way; and once or twice new manuscripts unexpectedly came to light, changing the tentative dating and identification of one or another of the texts. What began as a simple alphabetically ordered series of about 45 texts eventually took shape as a book in four sections (of uneven length) which covers the ground of all posthumous additions to Voltaire’s ‘alphabetical works’, usually under the title ‘Dictionnaire philosophique’, from 1784, through the nineteenth-century, right up to the present day, in the form of a fragment that has in fact never before been published at all.

The chain of editorial decision-making goes further back in time than one initially realises, however, starting with Voltaire’s own apparent intention to produce a compendium of excerpts from other people’s works. As Bertram Schwarzbach adumbrated in 1982, twenty-four of the texts in this volume (with a possible twenty-fifth), show Voltaire (or one of his secretaries, perhaps?) re-working existing writings by others in what sometimes strongly resembles current practices of copying and pasting, much as we move sentences and parts of sentences around using a word processor. This in no way suggests that Voltaire was guilty of plagiarism: to begin with, he did not publish these re-workings in his own lifetime; furthermore, the boundaries of editing, re-publishing and re-purposing in the late eighteenth century were different than they are today. But the fact that these manuscripts were found amongst Voltaire’s papers meant that his early editors believed them to be by him (with one exception, ‘Fanatisme’, which they recognised as an abridged version of Deleyre’s Encyclopédie article). Thus were these texts eventually published under Voltaire’s name in the Kehl edition, leading to a (partly) unintentional distortion of the Voltairean canon, perpetuated in all subsequent editions until the Oxford Œuvres complètes. Questions such as these are soon to be addressed more generally in a one-day conference: ‘Editorialités: Practices of editing and publishing’, and Marian Hobson has written elsewhere about the value of critical editions. It is in part thanks to modern-day editorial work that the editor-generated puzzles of over two centuries ago are now being unpicked: a neat illustration of just how much the role of editor has changed in that time. 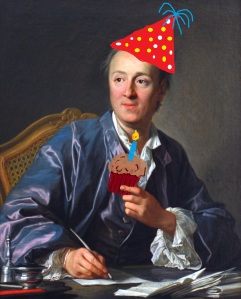 Wherever you are – for you were a non-believer all your life, and the afterlife you looked forward to was one of infinitely recyclable molecules living on in ever new combinations. A process possibly without end, spinning out like the cosmos itself, but one that was sufficiently complex to leave room for human intervention.

So for 20 years of your life and against the odds you edited the Encyclopédie, aiming to consolidate what was known about agriculture, art, theology, trade – a raft of subjects that probably no other European would have dared bring together – in order that intervention might improve, and wrongs in human systems and thought be at least discussed, and if possible righted.

However, that changing of opinions and recycling of molecules requires energy – that you also knew. In deliciously underhanded ways you developed yours by writing: for instance, dialogues of speculative science prefiguring cloning (Le Rêve de D’Alembert); a hilarious novel (Jacques le fataliste), anticipating le nouveau roman of the 1950s and 1960s, one presenting a net of random co-occurrences out of which events develop in a way that mimics freedom. Your novel forms a net which thus appears as the paradoxical opposite of a linear, causal determinism, and from it we see that these apparent opposites take in each other’s philosophical washing: What is it to be free? Not to be determined. To be determined? Not to be free.

Notably kind, you yet had a talent for comedy and satire which you hid in unpublished work, the satire in the form of a novel-cum-dialogue (Le Neveu de Rameau). Unlike your friend-enemy Rousseau, you are not in the Panthéon; your work doesn’t appear as a set philosophical text in that summum of your country’s education ladder, the written exam of the agrégation en philosophie. 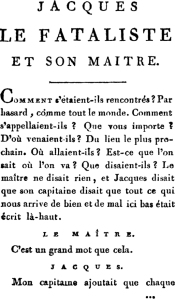 Your accolades are less of the Establishment, are more wayward and in the future – you will be translated by Goethe, be used as a springboard towards the dialectic by Hegel, and Freud will be glad to find in you a past confirmation of his Oedipus complex. Your work ghosting for others (the atheist d’Holbach), commenting on and round them (Helvétius and the believer Hemsterhuis) and collaborating namelessly on a history of colonialisms (L’histoire des Deux-Indes) has gently rocked beliefs without inculcating dogma or doctrine. We can’t turn you into a memorial, not yet anyway, there is too much to do. You make us keep on thinking. Thank you for all this, cher Denis Diderot!