‘Nous étions au XVIIIe siècle, qui est celui des Sciences et des Arts’, proclaimed Danilo Samoilovich in his Mémoire sur la peste (Paris, 1783, p. xviii). Dedicated to Catherine the Great, it was an account of his experiences as a physician during the great plague of Moscow in 1770-1771. It was also a tribute – in the most ‘enlightened’ of all centuries – to ‘the enlightened doctors of Europe’ who had discovered that plague was contagious, and could only be caught by contact with infected persons or substances. As a result, and under the guidance of an enlightened ruler, quarantine lines had been erected around plague-stricken Moscow. They had contained the disease there, and protected St Petersburg from infection. Once a cordon sanitaire had been established, Samoilovich concluded, plague ‘could not cross the limits fixed for it by the government’.  Containment worked when backed by ruthless political action.

When I came across this passage while working on plague in the eighteenth century, I thought it might interest historians of the Enlightenment; and I was reminded of it again when I read the recent blog by Cindy Ermus on ‘Leadership matters…’ (3 April 2020) which focuses on the plague epidemic of Marseilles in 1720-1721. The Moscow example certainly shows that leadership mattered there, but the Marseilles plague is also relevant because it demonstrated that Samoilovich was wholly wrong to think that all the enlightened doctors of Europe agreed that plague was contagious and quarantine necessary. In the 1720s physicians in France were deeply divided between contagionists and anti-contagionists, many of the latter from the famous medical school of Montpellier, and several of those who worked in Marseilles were eager to air their disagreements in print. Consequently, when Gabriel-François Venel came to write the authoritative article on ‘Contagion’ in volume 4 of the Encyclopédie (first published in 1754), he was compelled to declare that there was no issue more uncertain and divisive ‘in medicine than the existence or non-existence of contagion’.

It had been equally divisive in England in the 1720s in debates between advocates and critics of a new Quarantine Act, introduced by Walpole’s government to be implemented if plague arrived from Marseilles. There should be a military cordon sanitaire around London, and the infected and their contacts were to be moved from their homes and isolated elsewhere. Under public pressure the most intrusive parts of the Act had to be repealed, but that did not stop a major controversy in the public press between contagionists and their opponents, in which Daniel Defoe proved his stature as journalist as well as novelist by not only writing a journal of an earlier plague year, but seeing the virtues and vices of both sides. It had to be accepted, Defoe insisted, that ‘a public good’ sometimes justified ‘private mischief’. In a plague, something had to be done by government to prevent more death and disorder.

It was the presumption of contagion, therefore, rather than the proof of it which provided political authorities with what ‘scientific’ justification they had for action in eighteenth-century Europe. It seemed plausible enough, given the concentration of disease in identifiable households and neighbourhoods, and that was sufficient to justify elaborate and expensive efforts at containment, not only in France and Russia, but in Germany and Scandinavia where there were major epidemics in the first decades of the eighteenth century. Like their predecessors in the seventeenth century, rulers of empires, kingdoms and city states were all eager to show that they were doing more than their neighbours and doing it more successfully. As in the present pandemic, subjects and citizens were assumed to need reassurance that their rulers were more effective, and indeed more ‘enlightened’, than their rivals.

This is not to say that they did not have some reputable medical authorities on their side, of course. In the 1720s, for example, the advocates of contagion included a major authority on plague, Jean-Jacques Manget of Geneva, who published a short treatise expounding his case. It had as its frontispiece one of the earliest illustrations of the protective uniform worn by plague doctors, in France and elsewhere. With its mask complete with a beak for holding herbs, it was a powerful statement about infection. According to Manget, it was worn by some of the anti-contagionist physicians from Montpellier in Marseilles, and something very like it was recommended for the confirmed contagionist physicians in Moscow in 1771. Like quarantine, masks as ‘personal protection’ against contagion have a long history.

As long as plague remained a real and present threat to Europe, the presumption of contagion and all it implied remained powerful. Early in the nineteenth century Russia was erecting land and maritime quarantine stations in the Black Sea region in order to defend its empire from infection from further East. In western Europe, which had scarcely seen plague for half a century, some governments felt better able to relax their vigilance, partly at least because they were under pressure from commercial interests wanting less quarantine not more. Even so, the relaxation was a very slow process. 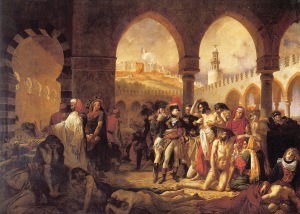 Bonaparte Visiting the Pesthouse in Jaffa, by Antoine-Jean Legros (1804).

One significant marker of changing perspectives is the famous picture of 1804 showing Napoleon in a plague hospital in Jaffa in 1799. He is portrayed touching the plague bubo of a patient, a gesture probably copied from one of the Montpellier-trained physicians practising in Marseilles in 1720, who wanted to prove that contagion held no terrors. In 1804 it was no doubt intended to show the superiority of Western science, and that plague presented no threat at all, at least to Europeans. Bonaparte had nothing to learn from modern world leaders about the political utility and propaganda value of a grand gesture, preferably supported by a little modern science.

In present circumstances some politicians in the UK claim to have been ‘following the science’ in their policies against a pandemic. That has never been as easy as it sounds. The history of plague is full of disputes where the experts – physicians in this case – were deeply divided. Since nothing at all was known about how plague was transmitted, about its dependence on rats and fleas, for example, argument was inevitable. In the case of Corona, the scientists know vastly more about their target. But even then they cannot always be unanimous in their judgements on the balance of probabilities when it comes to interventions whose outcome depends upon the behaviour of crowds as well as individuals. Then all action is political, and when the experts are divided about appropriate action, as they must often be, the quality of political leadership matters all the more.

Today we are making a foray into the seventeenth century with Claire Turner. Claire is a first-year PhD student at the University of Leeds. Her research, which builds on her recent MA dissertation, focuses on how people experienced and perceived the plague through their senses in seventeenth-century England.

How well do you know your food, drink, and medicines? Do you trust their ingredients, appearance, and their taste? Recent research has demonstrated the importance of a balanced diet for convalescents in the early modern period. These concerns were equally prominent during London’s seventeenth-century plague outbreaks. People have always used their senses to decipher whether foods are pleasant or unpleasant, safe or unsafe. However, the senses could be easily deceived, no more so than in seventeenth-century discourses of food, drink, and medicine.

A cart for transporting the dead in London during the Great Plague. Watercolour painting by or after G. Cruikshank (1792-1878). (Wellcome Images)

In 1665, the plague visited London for the final time. Known as the Great Plague, this outbreak was arguably the most severe to visit the city in the seventeenth century. Concerns over the quality and wholesomeness of foodstuffs were paramount. In particular, Margaret Dorey has noted how contemporaries of plague outbreaks were suspicious of food traders such as butchers. A tract published in response to the outbreak included a warning to its readers. Roger Dixon highlighted the dangers of consuming meat which had been modified by the butchers who were selling it. The meat was blown into by the butchers with their ‘…filthy Pockey, Stinking, Putrified Breath, whereby they putrifie the flesh’. The practice of blowing meat was used by butchers in the early modern period to make their meat look plump, healthy, and fresh. In this way, butchers were deceiving the sense of sight. By making their foul meat look healthy, they actually further contaminated the meat by depositing their foul-smelling and potentially contagious breath into it.

Another significant outbreak occurred in London in 1625. At around the same time, Lady Frances Catchmay completed her compilation of medical recipes in A booke of medicens. One of these recipes concerned the plague. It advised the use of sugar to counteract the unpleasant taste of the remedy. Here, the use of sweet-tasting substances disguised the bitter and unsavoury taste of the medicine. As well as deceiving the sense of taste, the author of the recipe invoked the sense of sight by encouraging the addition of ‘three spoonefulls of white vinegar’. Derived from ancient European thought, the colour white was associated with purity. Research by Sidney W. Mintz has outlined that substances such as sugar and vinegar were deemed particularly effective when they were especially white. By influencing the colour and taste of the remedy, the author made the medicine appear even more effective and wholesome.

Issues concerning sensory deception in diet and physick were evident across numerous plague epidemics. In both 1625 and 1665, authors of plague tracts focused on the hazards of consuming pleasant-tasting food and the benefits of eating seemingly unsavoury food. In 1625, London physician Stephen Bradwell advised his readers not to consume sweet-tasting foods because it ‘betrayes their vnfitnesse in times of Contagion’. Similarly, in London, in 1665, an anonymous tract encouraged the consumption of sharp-tasting sauces and juices alongside meats which did not putrefy and were easily digestible.

This awareness of the benefits of sharp-tasting foods was also present in tracts relating to plague outbreaks outside of London. In Oxford in 1644, Lionel Gatford informed his readers that often the most unsavoury and sharp tastes were ‘undoubtedly the most wholsome’. Therefore, these writers warned their readers not to let their sense of taste deceive them. To a certain extent, theories of food consumption and plague in the seventeenth century reinforced the notion that sensory ‘opposites attract’.

Ideas about illness and taste are once again at the forefront of our minds in the current COVID-19 pandemic. Health experts have reported that a proportion of COVID-19 sufferers experience an absence of the senses of taste and smell. It is clear, then, that the sense of taste will always remain a key indicator in experiences of illness and recovery. Alongside the other senses, taste in the seventeenth century was deceptive and hazardous. Today, its absence is just as menacing.