Was 9 Thermidor Year II (27 July 1794) the most copiously documented day of action in the French Revolution? It saw the overthrow of Maximilien Robespierre, most high-profile member of the Committee of Public Safety which had for more than a year ruled through terror – and is one of the pivotal days of action (or journées) around which the Revolution developed. The most influential journée in terms of French national history was 14 July 1789, which saw the storming of the Bastille and which is conventionally viewed as marking the beginning of the Revolution. Another day, 18 Brumaire Year VIII (9 November 1799), witnessed the coup d’état by which Napoleon Bonaparte seized power and effectively ended the Revolution. The overthrow of Louis XVI and the monarchy on 10 August 1792 and the 9 Thermidor journée mark the third and fourth journées which structure the revolution in most historical narratives.

There are numerous accounts all of these individual days, for each was a kind of ‘lightbulb moment’ that stayed in the minds of participants. But in writing my book, The Fall of Robespierre: 24 hours in Revolutionary Paris, I gained a strong impression that the ‘best-documented’ accolade must go to 9 Thermidor. After 18 Brumaire only the heroic Napoleonic narrative was allowed and censorship closed down on discordant stories. There was much to celebrate after 14 July 1789 and 10 August but celebration was not investigation. And what marks 9 Thermidor off from all others is that the day was followed by extraordinarily detailed attempts to recapture exactly what had happened in all parts of the city.

The reason for this was the determination of government to root out and to punish those individuals within the State, in public life and across the city who had supported Robespierre. Actions might relate to events over the previous two years of terror, but the litmus test of what began to be called ‘Robespierrism’ was invariably what individuals actually did on the day of 9 Thermidor. The city government, the Commune, had tried to mobilise Parisians to offer armed resistance to the national assembly in Robespierre’s cause. So the key question was, had an individual shown support for Robespierre and his supporters in the Paris Commune in their attempt to overthrow the government and purge the national assembly? Or did they remain loyal to the national assembly and the rule of law? Those found guilty of ‘Robespierrism’ could face expulsion from public life, imprisonment and even death at the guillotine.

Newspaper reports, political pamphlets and later memoirs invariably contain accounts of the day. Yet this was only the tip of the iceberg. A few days after the event, Paul Barras, the deputy whom the government charged with the security of the city on the night of 9 Thermidor, initiated a punctiliously thorough review of everything that had happened within each of the 48 Parisian sections on 8, 9 and 10 Thermidor.

‘Gather together all details’, he instructed sectional authorities. ‘A fact that seems minor may illuminate a suspicion or lead to the discovery of a useful truth. Inform me of all orders that you gave and all that you received; but above all, be precise on the dates and the hours; you will appreciate their importance.’

This call engendered nearly two hundred micro-accounts of at least part of the day from vantage points all over the city containing millions of the called-for ‘details’. Many of the individual accounts were broken down for key periods of the day into quarter-hourly chunks.

Besides this capital source, the Convention also set up a special official commission to make a report on the day, which was presented in the assembly exactly a year later. And finally, literally hundreds of individual police dossiers over the next year or so also provide similar micro-accounts of episodes and moments of the day as ordinary citizens were pressed to prove their loyalism.

Most of these extremely rich sources – never before tapped by historians in quite this way – are to be found in the French National Archives, particularly in series relating to policing and judicial affairs. Taken together, they allow us to see the city in close-up during these 24 hours through a mosaic of thousands of narrative micro-fragments, as its inhabitants confronted and grappled with a decision that would affect not only their own futures but also the future of the Revolution.

Studying these accounts, collating them and analysing them at the micro-level not only gives us an extraordinarily vivid picture of a city at a pivotal moment in its history. It also allows us to present a new narrative of the day and a new analysis of what was at stake within it. What emerges – in a way that cuts against conventional narratives – is a profile of a moment at which Parisians took their political futures in their hands and overthrew Robespierre.

Researching and writing the history of these 24 hours, I have often pondered whether there is another day in the whole Revolutionary decade when we can see what was  happening up close at such a moment of drama. Indeed we might even ask: was 9 Thermidor the best-documented day in the whole of the eighteenth century? 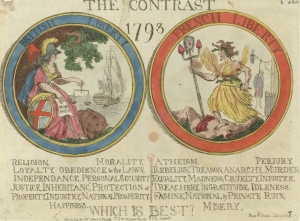 The concepts of ‘crisis’ and ‘apocalypse’ have reappeared rather abruptly on our secularized horizons, yet they have never been completely absent: merely, one could argue, in retreat from our prevailing belief in ‘progress’. From meditations on a ‘last man’ in Victorian England to Günther Anders’ writings on the nuclear threat in the 1950s, from eighteenth-century literature on ruins to ISIS today, these themes seem to be inextricably bound up with Modernity and our experience of it.

‘Crisis, extremes and apocalypse’ is a new research network at the University of Oxford that seeks to shed light on and engage with themes that are more timely than ever. Indeed, these themes have a long history and include events from the French Revolutionary period. After hosting a workshop on ‘Rousseau, Freedom and the French Revolution’ in March, in April the network welcomed Marisa Linton from the University of Kingston to discuss the French Revolution and the ‘politics’ and ‘language’ of virtue in a talk on ‘Robespierre and the politician’s terror’. The Revolutionary era’s diffusion of power and obsession with transparency led all political members to fashion themselves as men of virtue.

As Camille Desmoulins boasted on 14 December 1793 to the Jacobin Club: ‘I was always the first to denounce my own friends; from the moment that I realized that they were conducting themselves badly, I resisted the most dazzling offers and I stifled the voice of friendship that their great talents had inspired in me.’ (Original French: François Aulard, ed., La Société des Jacobins: recueil des documents pour l’histoire de club des Jacobins, 6 vols, Paris, 1889-1897, vol.5, p.559.)

This pursuit of a ‘Republic of virtue’ thus compelled all political members to give constant performances of virtue that threatened to spiral out of control and into violence at any moment: every action was scrutinized and could be interpreted as suspicious, leading to a pervasive fear.

The network will be hosting Marisa Linton once again in late autumn 2017, alongside Olivier Tonneau and Sophie Wahnich, for a workshop on Saint-Just. Visit the network’s homepage or our Facebook page for updates! 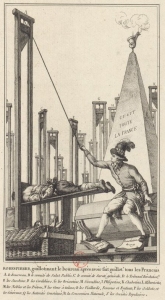 Over 220 years since his death, Maximilien Robespierre continues to generate controversy over his role in the traumatic events of the French Revolutionary period known as the ‘Terror’ (1793-1794). Historians have repeatedly sought in Robespierre’s personality and motivation an explanation of the Terror. Marisa Linton argues that such interpretations can offer only a limited understanding: in order to comprehend both Robespierre and the Terror, we need to place his actions within the wider context of Revolutionary politics in the National Convention, paying close attention to the atmosphere in which politics were conducted. Most importantly, we need to take into account the extent to which political choices during the Terror were influenced by intense emotions on the part of the Conventionnels themselves – above all, the emotion of fear.

Marisa Linton uses ‘the politicians’ terror’, a term she first identified and used in her book Choosing terror: virtue, friendship and authenticity in the French Revolution (OUP, 2013), to throw new light both on Robespierre’s role in the Terror, and on the nature of the Terror itself. The politicians’ terror was the form of terror that Revolutionary leaders meted out to one another. The Revolutionary leaders were themselves ‘subject to terror’. This took two forms. Firstly, Revolutionary leaders were liable to arrest under the laws that enabled terror, as successive laws removed their parliamentary immunity and criminalised the ‘wrong’ political opinions. Secondly, they were subject to the emotion of terror. From the outset of the Revolution there was an expectation that Revolutionary politicians should be able to demonstrate authentic political morality (virtue). During the heightened atmosphere of 1793-1794, and against the backdrop of fears that France faced military defeat, any failure of Revolutionary politicians to demonstrate their political virtue could be seen as an indication that they were secret conspirators, motivated by financial and political corruption, and in league with the royalists and foreign powers to undermine the Revolution from within.

Marisa Linton then gave an extended account of the politicians’ terror, before going on to examine its role in one of the most iconic events of the Revolution – the arrest, trial and execution of Georges Danton and his group, the Dantonists, which took place just months before the fall of Robespierre himself. Listen to the full podcast of Marisa Linton’s talk, and look out for the workshop on Saint-Just. 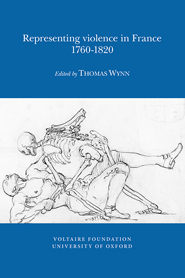 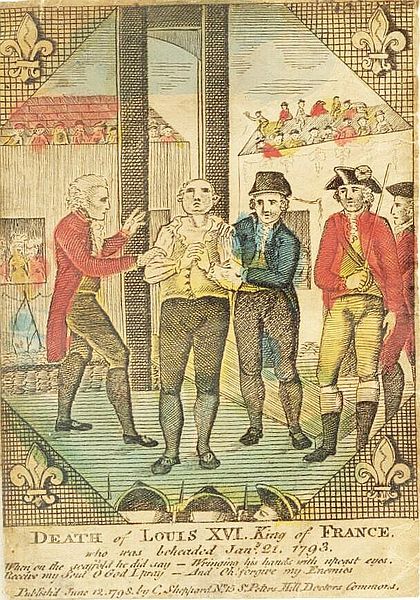