We are currently finalising the programme for Digitizing Enlightenment IV, a day-long workshop that will take place on 15 July as part of the ISECS Congress in Edinburgh this summer. In order to expand our network of Digitizing Enlightenment projects and researchers, we encourage those working in any aspect of digital humanities across the interdisciplinary spectrum of eighteenth-century studies to attend the event, if in Edinburgh, or contact us for more information.

Meantime below is the second post in our series of follow-up discussions based on work presented at the Digitizing Enlightenment III workshop.

Eighteenth-century French salons have developed a mystical aura as sites of elite sociability and (more controversially) as potential workshops of Enlightenment philosophy. They were, however, ordinary face-to-face gatherings in many ways – not unlike unscheduled conferences and meetings with loose agendas today; the one consistent difference is that they were held in private homes instead of conference rooms and organized by individuals (normally women) rather than groups or committees. The nineteenth-century term “salon” grouped together a variety of meetings with certain characteristics: salons were held in private homes with relatively elite participants, conversation was the primary activity, and they occurred on set days and at times that were part of a larger social calendar. Aside from these very general characteristics, salons had a wide variety of purposes, publics, and activities. 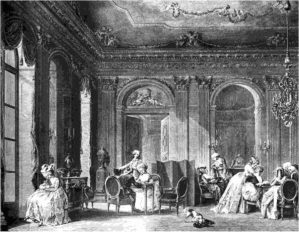 The most celebrated among salons, notably Tencin’s, Graffigny’s, Geoffrin’s, and Lespinasse’s, have become associated with great writers, philosophes, and mathematicians, like Voltaire and D’Alembert. Antoine Lilti has challenged the view that salons were primarily counter-cultural venues for philosophical debate, showing that the aristocratic traditions influenced notions of politesse in the salons and emphasizing the aristocratic habitus of many salon hostesses even when they had philosophes as guests. Disagreements over the character of salons may amount to differences more of degree than of type, since historians generally agree that the salons were mixed environments, but these debates do demonstrate the importance, now more than ever, of working through who was in attendance, in order to identify the social characteristics of eighteenth-century French salons.

I am the co-director with Chloe Edmondson of The Salons Project, a database of primarily eighteenth- and nineteenth-century European salon participants. We completed our pilot project of French salons from 1700 to 1800 last year and have some preliminary results, which will appear in the volume Digitizing Enlightenment, edited by Glenn Roe and Simon Burrows, in 2019. As expected, we found a great deal of evidence for social mixité in eighteenth-century salons, including patterns of mixed gender, age, occupation, interests, and social status. We also found that both women and literary figures were present in all of the major salons, including salons like Deffand’s which were not known for their openness to the philosophes. We found that nobles were present in all salons, as were gens de lettres, and that these people were often one and the same.

Our list of more than 600 salon participants is far from a complete record of eighteenth-century French salon attendees, but it is the largest and most complete database that we are aware of. The purpose of our study was not only to create a database, but also to create a method and a format for sharing data about salons and other informal networks. This method uses the robust data model created by the Electronic Enlightenment project, such that our data are compatible with the many other Enlightenment-era projects that are inspired by that database. We also use the schema “Procope”, which we developed along with Maria Teodora Comsa, Dan Edelstein, and Claude Willan to classify Early Modern European individuals, and which is described in our article “The French Enlightenment network”.

Salon, correspondence, and knowledge networks in French salons, 1650 to 1815 (data from The Salons Project, Conroy and Edmondson).

Within our larger dataset (1650 to 1815), we found that the letters networks and salon networks remained well integrated, and that philosophes were a minority but well integrated into the core of the network (see diagram). The most central figures are the ones whose networks are most associated with each field of knowledge (for example, Lespinasse’s salon is strongly associated with the “Letters_Philosophical” network, whereas Praslin’s is not; Voltaire’s correspondence network is more strongly associated with the encyclopédistes than is Necker’s; the Letters networks and “Letters_Philosophical” network are themselves tightly connected and central to salon networks). Whereas the best known salons of the era were well integrated into the letters and philosophical networks, it is important to remember that many of the salon attendees were not otherwise part of the French Enlightenment network, especially women, lower-status individuals, family members of other salon participants, and foreigners. By adding these more marginal people to the records on eighteenth-century French sociability, we hope to open up new avenues for finding social relations that are not well known among these more marginal participants on the edges of the Enlightenment. Even where we were not able to learn much about some of these more minor figures, including them in this preliminary dataset increases the chances that we will learn more about them in the future.