We recently had the pleasure of welcoming publisher John Mitchinson to the Voltaire Foundation for a particularly enlightening and enjoyable talk. Like Voltaire at Ferney, Mr Mitchinson is a keen amateur beekeeper, and like him he also keeps livestock, and the similarities do not end there.

John Mitchinson’s latest venture in the fast- and ever-changing world of publishing is a company based on the principle of crowd-funding, which goes by the name of Unbound. By means of short videos hosted on the company’s website, prospective authors introduce themselves and pitch their respective projects, and members of the public are invited to pledge money for the direct funding of the projects that they would like to see come to fruition. This is a very creative and efficient way of bringing authors and readers together and of cutting out unwieldy, expensive and sometimes downright parasitic chains of intermediaries.

La Henriade: first page (out of 10) of the list of subscribers.

In the four years that Unbound has been in existence, Mr Mitchinson and his team have scored some real successes, most recently with the publication of Letters of Note (by Shaun Usher) and The Wake (by Paul Kingsnorth).

Unbound may use state-of-the-art IT to drive its business but in its own way it has renewed a tradition that was well established in the 18th century, that of publishing books by raising money by subscription (Alexander Pope and Samuel Johnson come to mind). This is where the third similarity between our recent visitor and Voltaire lies. 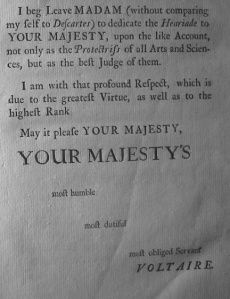 La Henriade: last page of the dedication to Queen Caroline.

For Voltaire himself famously used this method to get his epic poem La Henriade published in England in 1728, using the contacts that he had made among the great and the good during the very busy two years he spent in the country. The edition boasted a long and impressive list of subscribers (among whom were George Berkeley and William Congreve) and it was dedicated to Queen Caroline. Of course, with the advent of the Internet, the pool of would-be subscribers need not be as exclusive as it was in Voltaire’s time: anyone with five pounds to spare can decide to back a project on the Unbound website, even cobblers and servants! [1]

In a publishing world where abundance is not always synonymous with diversity or originality, it is reassuring to see forgotten avenues being explored anew so authors and readers can be empowered to communicate, collaborate and venture off the beaten track together.

[1] ‘On n’a jamais prétendu éclairer les cordonniers et les servantes’ (‘It was never our intention to enlighten cobblers or servants’), Voltaire once wrote to D’Alembert (15 June 1768).